The Hourglass of a Fighter – Ruiz Jnr v Joshua II

Across the long bars of New York City, in the casino snugs of Vegas and onto the historic pubs of London’s East End a fighter’s greatness is always firstly defined by his ‘record’. Whether he kept the ‘O’ , but if not, always underlined by the phrase “But yeah…who did he beat ?”. More pointedly “Who did he lose to ?”

Did the fighter come back from a devastating defeat to prove his greatness ? All the true greats of the sport have come back – from Louis and Sugar Ray Robinson – through Ali and Foreman to Sugar Ray Leonard, Duran, Tyson and Lennox Lewis in the modern era. Lewis not once, but twice. This is the challenge that Britain’s Anthony Joshua now faces. A path well trodden by boxing’s modern greats.

Anthony Joshua, the so called ‘saviour’ of the Heavyweight division and boxing per-se, the new kid on the block, who looks and talks like a million dollars, a marketing and PR man’s dream. The same AJ who hit the canvas 4 times in Madison Square Garden this June before being rescued from further punishment. This is the challenge that now faces the Brit, to comeback when all has been temporarily lost – the ‘O’, invincibility and also the street cred’ that goes with it. Until the fateful night in MSG there were few doubters of Joshua’s legitimacy of being ‘the’ Heavyweight Champion, now the vultures of doom are circulating above his head.

To get back on the path to greatness Joshua must take the first small step through the shifting sands of Saudi Arabia. He must avenge his sole defeat to Mexico’s Andy Ruiz Jnr. The so called ‘no hope’, the Mexican-American monolith with fast hands and as it proved equally concussive power. Joshua’s ‘legacy’ is now like a carefully constructed sandcastle; with the tide now lapping at its base and the defences being undermined by naysayers. Can he come back ? What is required ? Is his option to take the immediate re-match and the rumoured $100 million dollar combined purse offered in Saudi Arabia to be his ultimate undoing ? On December 7th in Diriyah on the outskirts of Riyadh we will know the answer. According to Matchroom the rematch is set.

But what an opportunity for the Brit, a chance to avenge that sole defeat but also to make the step to greatness. Also; to truly become Heavyweight Champion of THE World, (or at least the WBA, IBF and WBO versions of it !). Three quarters of the journey to be Undisputed. Projecting himself as a man who has the courage to step in the ring within six months against an opponent who took all that was dear to him. Elevating himself in the world’s consciousness as a modern day heavyweight who can truly cross continents and cultural boundaries. Not just the traditional trans-Atlantic route and bouncing of the title from the UK to USA but, to the sands of Arabia and the Middle East.

Muhammad Ali was loved and revered for taking the heavyweight championship around the world. Firstly, by astonishingly regaining the title from George Foreman in Kinshasa, Zaire (now DR Congo), then taking it to outposts like Manila, Kuala Lumpur and Jakarta. A TRUE Heavyweight Champion of the World. This didn’t make the man’s legend but certainly enhanced it. Joshua now has the opportunity to transcend the sport, not through marketing but, achievement.

So what must he do to achieve this ? Many experts in the boxing business predict a repeat of the June proceedings. He’s taken the rematch too soon, he should stay away from Ruiz, his style and speed is no good for him. But credit Joshua for taking the re-match. He could have easily had a few tune up bouts before facing his nemesis, but he wants those titles back; and fast.

To achieve this Joshua must first get his mind right – get back into fighting mode. Look upon the MSG experience as bad night at the office. He must analyse with his trainer Robert McCracken where he went wrong – poor pre-fight camp, complacency, lack of Plan B – whatever the primary cause is (probably a combination of all) the training camp for the re-match must be extensive and thorough. He must develop a Plan B, and more so, a Plan C. If Ruiz doesn’t buckle to the inevitable display of frustration and power in the first 3 minutes he must adopt a cautious but not over exertive mindset. Not fatigue himself physically and emotionally by a failed attempted early KO. Train for 12 rounds in both body and mind. Critically; Joshua must tighten his defence whether that means fighting more at range, but certainly tucking up in close. Holding and clinging on for life if necessary. Ruiz will be confident he can do the same again, so he is a dangerous foe.

Boxing history is littered with the results of re-matches being more emphatic than the first. Robinson v LaMotta, Ali v Liston, Tyson v Holyfield. But; British Heavyweights have shown that they can turn the tide – Lennox Lewis’ humiliation of Oliver McCall and KO of Hasim Rahman in rematches show it can be done. You have to regroup and change your game plan, remove the doubts and maybe re-structure your team. Maybe Joshua will take this option. This writer’s expectation is that McCracken will remain in charge of preparations but maybe some help is needed to develop an alternative game plan, or even someone who will allow Joshua to unleash that ‘street’ toughness and mentality that he showed in London 2012.

What we do know is if he can be successful ‘the castle’ can be rebuilt and the tide towards unification and mouthwatering prospect of the winner facing Deontay Wilder or Tyson Fury will approach like a tsunami. Bring it on ! 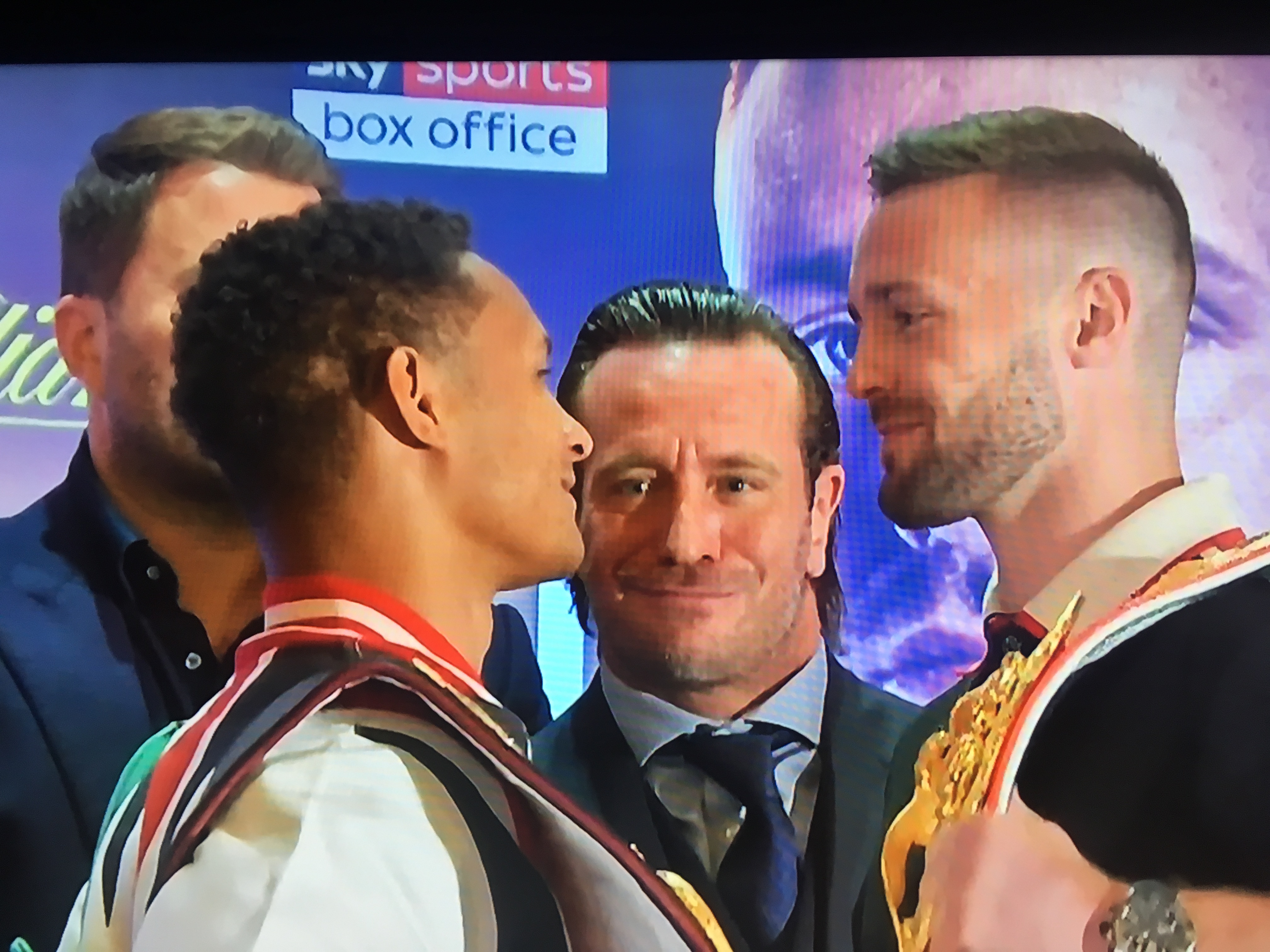 In a little under three weeks on 26th October at London’s O2 Arena the Super- Lightweight World Boxing Super Series will reach a climax. Up for grabs will be the Muhammad Ali Trophy, the IBF, WBA & WBC Diamond titles, and also The Ring magazine championship. This in essence will crown the supreme champion and the main man in the 140lbs (10st) division.

The combatants will be Regis Prograis 24-0-0 (20 KO’s) from New Orleans, USA and Josh Taylor 15-0-0 (12 KO’s) from Edinburgh, Scotland.  It’s a mouthwatering match between two undefeated fighters at the peak of their powers.

Both fighters first came face to face back in May in Glasgow following Taylor’s winning of the IBF strap v Ukraine’s undefeated Ivan Baranchyk.  Last month they renewed acquaintances in London’s presser to promote the October fight. Expectedly, both men are supremely confident and have refused to back down.
“I think I’m the best, Regis Prograis thinks he’s the best, but I’m confident of going all the way and win the Ali Trophy” said Taylor. Prograis recently responded on social media with “I’m coming to kick your ass. I can’t wait….”

So what can we expect ?  Both fighters are southpaws, excellent technicians and have power in both hands. Taylor (28) has the greater amateur pedigree having competed in the London 2012 Olympics and winning Commonwealth gold in Glasgow two years later. Meanwhile Prograis has the greater pro’ experience with nine more fights, turning pro in 2012 and wins over Julius Indongo, Terry Flanagan and Kiryl Relikh. Taylor however has the slightly higher knockout percentage (83 compared to 80%) but stellar victories against former champ Viktor Postol,  undefeated Ryan Martin and more recently taking Baranchyk’s IBF strap.  On paper this really is a ‘pick-ems’ fight.

Home town advantage would tend to favour Taylor, where a hard core Scottish following will undoubtedly pack the O2 Arena.  Plus, many who followed Taylor’s progress down the Thames in 2012. The atmosphere will be further fuelled by a brash American arriving on these shores, apparently 3 weeks before fight time. The hype and slanging will certainly build over the next 21 days.

This really is a fight not to be missed and a loaded Matchroom Boxing undercard will further enhance the evening. Latest news on this is the withdrawal of Joseph Parker from a heavyweight needle match with Dereck Chisora. You can expect a shortly announced replacement, hopefully of near similar pedigree, but also a stacked supporting event.

The fight will be live on Sky Sports Box Office in the UK and DAZN in the USA.